Tell me about your work: Andy LaViolette 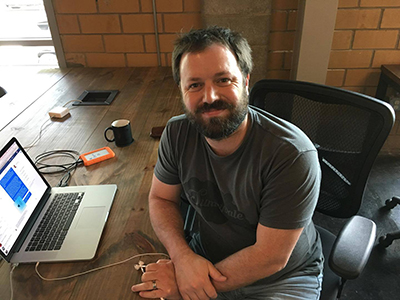 After being a freelance cinematographer for eleven years I just recently was brought on board to an amazing company called Shutterstock where I work as Senior Video Editor. I still work on projects for my video production company, Mr. Magic Carpet Ride Productions (MMCRP), where we create music-films, documentaries, fictional work, and commercial videos.

I got into doing video production when my dad bought some software for his computer that allowed him to capture his Hi8 camera's tapes and edit them into DVDs. I started filming performances of my jam band in the early 2000s and quickly found the limitations of the consumer video gear. After having some friends with professional cameras donate their time to come film a concert I was playing in Dallas I immediately fell in love with the quality of the footage. However, the cameras were never pointed in the right place at the right time and I was sure if I bought a camera like theirs that I could make great videos of our band. After doing that for years I began learning enough to charge money to film other people's bands and other kinds of projects and I realized this was something I really enjoyed.

I didn't specifically prepare for being a cinematographer on purpose. I was raised on television and movies and have always loved music and tech-oriented gadgets. Everything I learned about film-making was driven by maddening frustration of not being able to figure out the answers to problems and spending countless hours of research on the web for answers and guidance. As I transitioned into a legal business owner I turned to my wife for support and advice both creatively and from a business point of view as she is a talented photographer and learned a lot from seeing her dad as a business owner several years back.

As a freelancer a typical day is often spent communicating with other people about their projects. Scheduling, planning, building budget suggestions, researching gear, and constantly analyzing other works as sources for inspiration are a big part about the job. I would shoot 5-10 days out of the month and spend the rest either in pre or post-production for other projects. Working at Shutterstock has been an amazing change because my focus is to work creatively with the marketing team in NY via video conference and then edit content related to our short and longterm marketing goals. It's kind of amazing to take out the aspect of logistics and just focus on creating content with the amazing content they've gathered from all over the world.

The most rewarding thing about where I am at professionally is that I truly enjoy my daily life and I've finally gotten to a place where I can focus on being a husband and a father. Myself and my family have paid dues for so long just to be able to survive as creative professionals. It has meant making many sacrifices of things that many people take as a basic necessity of life and learning to live without them. So the balance of doing something that really enjoy now and being able to keep the lights on every month while still having time to appreciate my life is something I hope I can keep until the day I die.

There are still challenges even though I am very happy with where I'm at professionally. For me it is how to find the time to focus on my own creative initiatives while balancing my career and family life. I am currently working on a feature documentary film and another short film and I have to force myself to carve out time to keep moving them forward.

For many years I felt really guilty that I didn't end up being a professional guitarist as my career path. But it wasn't until I really made my mark in music-oriented film-making that I understood that I am a unique ambassador to those that speak deeply in the language of music and those that are career video professionals. First of all, I've learned that the crazy expectations of being a UNT music student make many other things in life that seem impossible at first glance become quite achievable after being dedicated to accomplishing something. I am also very thankful for the core classes I took and now see how higher education is a fundamental right that everyone deserves as it expanded my perspective and understanding of the world around me in ways that are beyond measure. So now that I'm 37 and I seem to have found my path, I don't regret any decision I made because everything I did was a contributing factor to the life I've accidentally created for myself.

When I was at UNT it took me several years to not feel terribly ashamed of my playing abilities. I see now how that was completely unnecessary and that even the best players at UNT have so many shortcomings compared to rest of the world outside of academia. I also began to associate music with deep feelings of guilt as I really don't know so many things that any trained jazz musician should know. If I could do it again I would have worked to start playing live gigs sooner than I did. Even beyond the hours of practice, I learned so much by working on the balance of entertaining a crowd while still feeling artistically satisfied with the music I was making.

What presence does music have in your life now?

I try to keep music as something sacred as it was when I first fell in love with it. I would never play the guitar ever again for any other reason than because it makes me feel good. In fact, I rarely listen to music. But if I do put music on it is to listen to an entire album, loudly, with no other distractions. I think too much emphasis has been put on recorded music. I am moved by seeing musicians play live with no PA and being true masters of their sonic environment to make people feel high from the vibrations only possible from instruments and not speakers.

I think people only know my work from the amazing musicians in the GroundUP and Snarky Puppy families. The work I've done with them will forever mean so much to me with unbelievable memories of seeing the world and hearing music I never knew existed. However, I would love to release motion pictures that involve dialogue and focus on the infinite number of beautiful characters that exist in story-telling. I'm very excited to slow down my musical work and focus more on screen plays and non-music related documentaries.

After I left UNT I played in a church band (that's when I began to really look at guitar as a job and not a passion), I taught at The Music Academy as a guitar and piano instructor, I played live jazz, I played in a Western Swing group, and was a film-maker the entire time. I'm very excited as of 2017 to be working full time as Senior Video Editor at Shutterstock.