Tell me about your work: Ben Jackson 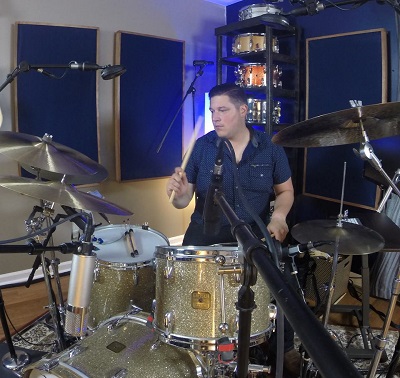 Like many professional musicians of my generation, I split my time between a few different roles. I am a freelance session drummer, as well as a producer and mix engineer.

Studio work was always something I knew I wanted to do, even before college, and while the focus was on honing my craft as a player at the time, I was very curious about the processes and skills involved in making records. After several years of working out of Nashville as a touring musician, I felt that I wanted to contribute more to helping artists create their music than by simply playing drums for them, so I began studying and learning about recording and producing. I now spend much more of my time producing than as a freelance musician.

Living in Nashville, I was able to take advantage of the resources of the community here to help me learn and widen my skill set. In the beginning of the transition, I played a less encompassing role in my productions and chose instead to hire the people who I wanted to learn from and did so by collaborating with them closely in a studio situation. I take on a larger role now, but still collaborate with many of the same experts as when I started.

My days vary pretty wildly depending on what part of the process I currently find myself. I have discovered that I need to get an early start every day in order to properly prepare for what's on the schedule. I typically spend an hour or so in the early morning communicating with clients, hired freelancers, assistants, studio mangers etc., coordinating the various tasks that need to be completed so the production process can run smoothly and on time. Then, as is typical in Nashville, I break my day into two blocks of time that coincide pretty well with the standard morning and afternoon session times here. My goal is to get two things done every day, whether that be recording a guitar overdub session in the morning and tracking drums for a remote client via the web in the afternoon, or editing a session in the morning and dialing in a mix in the afternoon.

For me, the driving factor has always been to be able to create music that when played through the speakers, sounds like you envisioned it in your mind prior to recording. When that expectation is met or exceeded, it's very rewarding.

Finding the balance when playing a different combination of multiple roles to different groups of multiple clients is pretty high on that list. I try my best to put on one hat at a time and stay there for as long as possible to make it easier to maintain my focus, but some weeks you just find yourself switching gears a few times a day every day. Having a really well laid out plan and schedule really helps with those weeks.

My music education plays a huge part in my daily skill set, from performance techniques to music theory and composition. However, I think the greatest role my education at UNT plays in my daily work is that it was at UNT that I really learned how to LEARN a concept, and to constantly challenge myself to continue learning and improving.

What might you have done differently during your time at UNT if you knew you would be
doing this sort of work now?

If I could time-hop backwards and tell my younger self what he should do it would be this: Start learning about the recording process NOW, and spent time honing that skill while in school. Become proficient on at least one DAW (Digital Audio Workstation). Start by learning to record yourself and your own instrument, and then record every ensemble that you can. Get as much experience working with singers as possible, as well as bands playing pop, rock, country, etc.--the popular styles, because the production styles for that music are much different than a chamber or jazz ensemble. Learn your theory and start composing music now as well. It will come in handy when producing.

My work has transitioned greatly from the time I moved to Nashville to become a touring musician until now as a producer/session musician. It continues to expand and shift as time, experience, and opportunities change and grow. I feel that my openness to trying new things, even when I'm not good at them yet, has been an enormous asset that has enabled me to shape my lifestyle to more specifically suit my preferences. Also, the advancement of technology and its effects on the music industry are a frequently discussed subject, but I feel most of what's out there focuses on the negative impacts technology has had on the 20th century musician's way of life. However, there are many wonderful opportunities within those advancements to be creative and stay busy as a full time musician. It's a new frontier where worldwide collaboration is more commonplace, and the creators who are familiar with both the language of music and the technology of capturing it are experiencing the benefits of the modern era. Kinda heavy, I know, but I feel that it's something worth thinking about at the student level.

I've been fortunate enough to have been in music 100% of the time since leaving UNT. I've worked as a touring musician for country and rock artists such as Sister Hazel, Joe Nichols, Frankie Ballard, Greg Bates and Aaron Tippin.