Tell me about your work: Colin Hinton 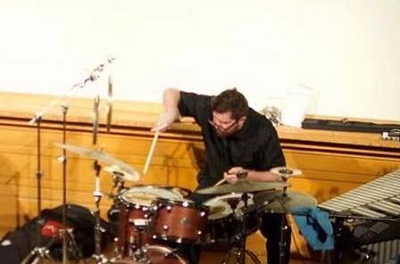 I am a freelance musician, composer, bandleader, and educator.

What led to you doing this sort of work? How did you prepare for it?

I've been playing music since I was four years old. When I realized that I could do it professionally (around age 12-13), I made it my goal to achieve that dream. I prepared for this by studying and practicing intensely. I spent almost 10 years in college pursuing (and finishing) both an undergraduate and advanced degree in music. I spent many years of my life practicing 4+ hours a day with no days off. I still actively take private lessons in both drumming and composition. I plan to go back and pursue a DMA in composition in a few years.

There's really not a typical day, but generally, I try to be up by 8 a.m. (this obviously is subject to change if I had a late gig the night before). By 9 a.m., I'm answering emails and figuring out what my goals need to be for the day, i.e. if I need to focus more on practicing, composing, organizing, promoting, etc. This can also change depending on my rehearsal/gig/teaching schedule for the day. If I have a night "off," I try to go out and hear musicians I'm either friends with or want to work with.

I love creating work that I find valuable and portrays an accurate reflection of where I am in my life. I've done 9-5 jobs outside of music and I quickly realized it was not the path for me. I honestly don't know what other career path would have worked for me.

Surviving in NYC off a gig-based economy can be depressing at times, but I find the rewards outweigh the financial hardships. Teaching college students who seem to have no interest in the tradition of the music (not that I am a traditionalist--at all) can be incredibly trying, and I often find myself being needlessly frustrated due to this. However, teaching students that DO listen to your advice and hearing them grow exponentially as improvisers is incredibly rewarding.

Though I did not finish my degree at UNT (even though I was there for five years), my time at North Texas was invaluable. Studying with Ed Soph for five years was amazing. I owe Ed a great deal for helping me become the musician I am today, and I'm happy that him and I are still in touch. I also had the opportunity to play and work with Lynn Seaton, Fred Hamilton, Brad Leali, Stefan Karlsson, and John Murphy frequently throughout my time at UNT. Working with the faculty opened me up to all types of different ideologies behind improvising and showed me different ways to think about and listen to music. Prof. Murphy inspired me to become involved in ethnomusicology and is largely responsible for my branching out from the "jazz" world.

I think about this often. The music I am involved in now is drastically different from what I did at North Texas. However, my studies at North Texas gave me the foundation I needed to branch out and pursue a different path. I would have invested more time in composition and studying classical music. This was not an avenue I had much interest in during my time at North Texas, but as I became older, my interest (see: obsession) in the avant-garde, 20th century classical music, and the AACM became the focus of my musical world. This was the focus of my graduate studies.

I try to stay active as a performer/composer across multiple musical platforms. I still play "standard" gigs, but I'm also incredibly involved in Brooklyn's "new-music" scene. I'm also writing for classical ensembles now. I am having a few pieces premiered in Italy in July. I lead a band named Facehugger. We'll be recording our first record in the fall (this will also be my first record as a leader), and I hope to have it released this winter.

Upon moving to NYC, I secured a job teaching at a small music school. I quickly left this job as the company was poorly organized and drastically underpaid their teachers. I've had loads of horrible day jobs. One summer in NYC I flipped burgers at an outdoor restaurant. That was the job that made me decide to go back to college to finish my undergraduate studies and continue to grad school. For about a year while finishing my undergrad I worked as an assistant manager at The Jazz Gallery in NYC. This was a great way for me to meet/hear musicians while still getting paid. I was fortunate to be a TA at City College for four of my five semesters as a grad student. I taught Jazz Rep III and IV (very similar to UNT's improv III and IV classes) under Steve Wilson.

What advice would you have for a current UNT student who is preparing to move to NYC? Try to form relationships with people who are already established in NYC, and visit the city as much as possible before moving. Probably the greatest thing I did while at North Texas to prepare me to move to NYC was sublet in Brooklyn most summers. I would come up for 1-3 months at a time, study with one or two people while visiting, and go to sessions/hangs/gigs every night. The biggest thing to be aware of when moving to NYC is that you must be patient. Even if you are a "first call" at North Texas, when you move to NYC you will be surrounded by everyone else who was a "first call" in their hometown, too. Be prepared to expand your musical horizons beyond what you already know, and take ANY gig you can. One of the best paying gigs I have is being the first call sub for a German polka/top 40 band!