Tell me about your work: Shawn Strickland 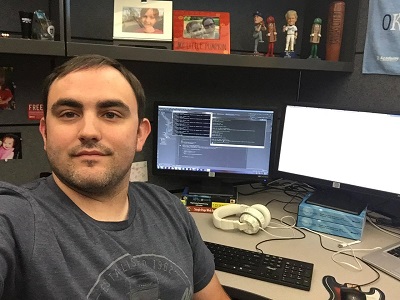 I'm a web applications developer. Mostly websites; but more and more software is going online now so that line is a bit blurry. I've made internal software for companies, music apps, and built websites for Sprint, Quiznos, Chick-Fil-A, Krispy Kreme, and other large web audiences. Occasionally, I'll work on more traditional open-source software, Musescore being the most interesting as of late (a great, free, cross-platform WYSIWYG music notation program).

I fell into it after getting out of music school. I always had a knack for computers and technology and would often be the designated "webmaster" for my bands' websites. I had a pretty good understanding of HTML, and with a bit of practice I quickly picked up where CSS in 2000 left off. This led to my first front-end developer job/apprenticeship. Working in the trenches with high-value projects allowed me to pick up other web technologies like Javascript quickly, and that eventually led to more back-end technologies that are often a traditional computer programming language where a lot of cool website guts live.

After I left UNT, I really needed to do some...thinking. And work. I was lost as to what I was going to do and who I was. An inferiority complex got the best of me and kept me from breaking through technical and theory-based walls in my playing, which would have probably been all I needed to defeat my lowered self esteem. It became painfully obvious that this problem was going to branch into any work I ever did, so I used the opportunity of teaching myself to code to prove to myself that anything is possible (intellectually or physically) with enough hard work and even more determination.

All my programming knowledge comes from teaching myself through resources I've cultivated over time. Most of those come from the open-source community, which is really just programming code used in the real world that's available to the public for improvement and learning. I also made extensive use of the tutorial boom that has taken YouTube by storm. And there's plenty of Q&A sites online available to programmers learning their craft. I slowly built up a resume and portfolio in a lot of ways musicians collect endorsements and positions in lucrative traveling bands. With enough experience under my belt, I was able to command more desired work.

What's a typical day like?
I'm up at 6 a.m. (not by choice - was never a morning person) to do the normal morning routine of a young family. I usually get to work between 8 and 9. Projects dictate what the rest of the day is like, but usually require collaboration with other developers and copious amounts of music. I'm always home for dinner with the kids, they're really my focus being at such a young age right now. I'll usually always have some time in the evening for practice or working on tunes.

Since everything I do is on the internet, I'll occasionally work remotely from home, too. Same sort of thing, minus the commute.

I worried that getting into something unrelated to music wasn't going to be rewarding to me, but surprisingly it is. The process of designing website architecture, building it, and seeing real people all over the world use it is very rewarding. It's a very creative process, which I think is where my mind is most comfortable. It's all art. Art is all around us. It's also financially rewarding.

Depending on the project and client, it can be stressful. But so can anything you take seriously. Web development requires constant learning of new technologies to keep up with the Ubers, Facebooks, Apples and Googles of the world, but it keeps your mind malleable and open. Occasionally a server will go down and you'll have to be the one who diagnoses the problem and bring it back up.

Sometimes I have to figure out what guitar T-shirt I'm going to wear for the day. It's an important decision. I don't want to play favorites.

I learned to teach myself at UNT. It was an important point many of the professors made in my time there. Without mastering that concept I wouldn’t have been able to do what I do now, and without studying music I’m not entirely sure I could have dove into an unknown industry.

There's are a lot of parallels in the I.T. world with music. More people than you'd think who program computers or maintain I.T. infrastructures actually come from a music background or have music degrees. Improvisation and creative problem-solving have obvious parallels, as well as working in a development team towards a common goal.

What might you have done differently during your time at UNT?

I’m not sure I would have done anything differently, academically. I haven’t hit a wall in Computer Science or Math that I couldn’t get my head around without higher level education, and relatively few employers require a Computer Science degree over experience for programming careers.

As a guitarist, I definitely wouldn’t have worried about gear the way I did then. A minimalist attitude for that will get you further than worrying about the next new DooHicky v4 with Boost™. That really bit me later on. Guitarists: gear will come, in time!

I definitely would have been more careful with the amount of student loans I disbursed.

What presence does music have in your life now?

It’s as present as it was before. If you asked my wife, it’s probably still all I think about. Since programming can be relatively singular, I spend a lot of time discovering new music and listening while I work. As I mentioned earlier on, I have young kids, so the "me time" is compressed, but when I have it it's usually spent with a guitar in hand.

A career path is just a path. There isn't necessarily a right or wrong one, only the one you choose. I've met plenty of people from vastly different education backgrounds who do something unrelated to their major for work. And it's not like you have to lock in once you've started. You can do anything, at any stage in life, if you have the right combination of elements to work from.

Just because you may have a degree in music doesn't mean you can pursue other interests, or other career choices. Your employers will appreciate the creativity you possess, your unique background in jazz will always come up in conversation, and you'll be a well-rounded self-teaching individual who works well in a group.

After I left UNT and repayment started on my student loans I worked for a time at Barnes & Noble in the music department (a job I had in high school), and worked for quite some time at Texas Roadhouse as a waiter, meat cutter, and training coordinator. I picked up a lot of great grilling and smoking skills from there.