History of Jazz at North Texas

The text that follows, originally entitled "50 Years of Jazz at North Texas", was written by David Joyner for the 50th anniversary of the program, which was celebrated in 1997. The additions by John Murphy are intended to bring the text up to date and to prepare for our 70th anniversary in 2016. To find out why that date is not 2017, read on.

A Short History by Dr. David Joyner, with additions by John Murphy commemorating the 50th anniversary of the first college jazz degree

In 1942, M. E. Hall, a North Texas graduate music student, was asked to teach dance band arranging to two students. Wilfred Bain, dean of the School of Music, asked Hall to write his master's thesis on a proposed curriculum for a dance band major. That thesis became the basis for the UNT jazz degree curriculum. Hall left the school in 1944 after receiving his master of music degree, but returned in 1947 at the request of the newly-named music dean, Walter H. Hodgson, to institute a degree program in dance band. The program included formation of the Two O'Clock Lab Band, the first performing dance band ensemble for which students were permitted to receive credit hours. As the jazz program grew, additional laboratory bands were needed to accommodate the numbers of students desiring to enroll. The bands were named for the hours at which they met, and, in the early years, the premier band was the Two O'Clock Lab Band.

While many sources continue to cite 1947 as the year our program began, it began in the fall of 1946. Alumnus William Thomson, who played trumpet in the early bands and went on to a distinguished academic career that included serving as Dean of the Thornton School of Music at the University of Southern California, wrote the following in an email to John Murphy on Feb. 27, 2010:

Your site continues the old fable that the Lab Band began in 1947.

I was in the first Lab Band. It began in the Fall of 1946, with Charles Meeks as director. (Charles was a grad student in composition at NT). Gene Hall couldn't leave his job in Fort Worth to do the job except on the weekends, so he didn't become a full time faculty member, and thus take over direction of the Lab Band, until 1947. That is why this untrue date of inception has continued for so many years.

In case you wish to check out my data, look at the NT Yearbook of 1947. Published in the Spring, it shows a photo of the Lab Band that started its rehearsals in the Fall of '46, with Meeks in front. (I'm in the trumpet section.)

Here's that photo. Click the image for a larger version. 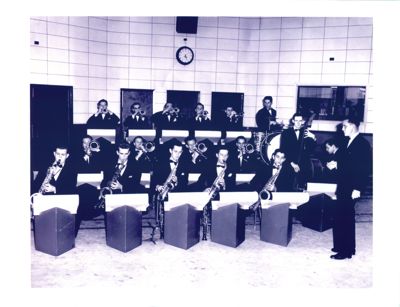 In an email to Steve Wiest on Dec. 15, 2011, William Thomson added more explanation:

It is my long-term understanding that the jazz program had been approved before I returned to campus (after a hitch in the Navy) in 1946. That's why I went back. I had an audition with the Jimmy Dorsey band in Dallas and turned down a job with the band as 2nd trpt player and arranger to go back to NT, where my future bride was in school. (I never regretted the decision!)

I imagine only a check of records from the State College Board could prove decisively that the "program" began at a certain time. I had no doubts that the program had been approved, that my comrades in the band were majoring in jazz, and this was before Gene came on board. (I had known Gene slightly in Fort Worth, where I grew up and played in the Danceland House band. (I know; you had never before heard of Danceland!)

...if you want local proof, just go to the NT library; look at the 1947 NT Yearbook. You will find a photo therein of the first NT Lab Band. This group could not be in the Spring 1947 yearbook if it had not begun operations in the fall semester of 1946. Gene Hall couldn't come to campus except on Saturdays in '46, so young Charles Meeks was hired to "front" the band. Gene moved to Denton the following year and took over the reins of the ensemble. (In those days we met at 5pm every day of the week in a recital hall of the old Music Building.)

Did you ever hear the story of how Dean Bain got the program started? He insisted on it because, as he said, "There are more jobs in dance bands these days (this was 1945 or 46) than in symphony orchestras." If you haven't heard the Bain story, here it is.

He went before the State College Board of Trustees in Austin and requested the initiation of a "Dance Band Degree Program" at North Texas State College. Several members of the Board were taken aback; they were devout Southern Baptists. One spoke up: "We'll not have any dance band degree programs on our campuses." Bain was a helluva bright guy, to say the least. He responded, "OK, let us call it a Laboratory Band Program." And so it was passed with that lexical cleansing.

William Thomson had contacted the College of Music with this information as early as his letter dated April 28, 1993.

In 1959, Hall accepted a teaching position at Michigan State University and was succeeded by Leon Breeden, a respected clarinetist, saxophonist, arranger and composer who had previously declined an offer to be staff arranger for the Boston Pops Orchestra under Arthur Fiedler. Breeden initiated moving rehearsal time for the flagship band up one hour; today it is known as the One O'Clock Lab Band for the hour at which it rehearses. (A persistent misconception is that the band takes its name from the popular big band tune "One O'Clock Jump.") Before Breeden stepped down in 1981, North Texas lab bands had received almost 50 national awards for group performance and for individual performance. Under Breeden's direction, the One O'Clock shared billing with Duke Ellington and Stan Getz at the White House (1967), appeared as official big band of the Montreux International Jazz Festival in Switzerland and toured Germany (1970), Mexico (1967), Portugal and the Soviet Union (1976) under auspices of the U. S. Department of State; and performed three consecutive years on jazz concerts at Spoleto U.S.A. Festival in Charleston, S.C. (1977-79). 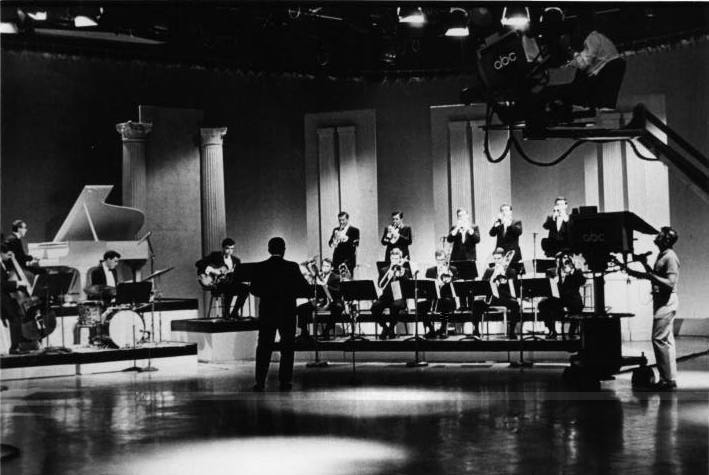 In August 1981, Neil Slater, founder and director of the jazz program at the University of Bridgeport, Conn., succeeded Breeden as director of the One O'Clock and Chair of Jazz Studies. Under Slater's direction, the One O'Clock has continued to make annual recordings and tour extensively with appearances at Pori, North Sea, Montreux and Antibes jazz festivals (1982), in Australia (1986), Mexico (1990), Canada and the Pacific Northwest (1991), and Portugal (1993). The band toured Japan for three weeks during the summer of 1996. Since 1967, the One O'Clock has issued 35 albums, including 29 annual releases. Two albums, Lab '75 and Lab '76, received Grammy nominations for performance and were the first such nominations bestowed by the National Academy of Recording Arts and Sciences (NARAS) to a student band. On Lab '89 , the One O'Clock recorded "Got A Match," composed by Chick Corea and arranged by Mike Bogle, who received an individual Grammy nomination for the arrangement. In 1993, Slater received an individual nomination for his arrangement of his original work, "Values," which was recorded by the One O'Clock on Lab '91. 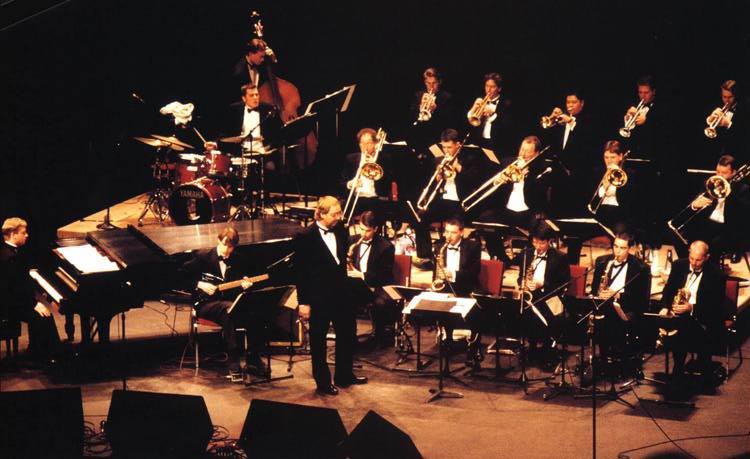 From one teacher, a handful of students, and almost no printed music, the division of jazz studies at North Texas has grown into a program which includes small groups, vocal jazz, and many special kinds of performing ensembles. Broadening its scope of excellence and maintaining its reputation for quality continue as the principal challenge and primary goal of the Division of Jazz Studies of the College of Music at the University of North Texas.

The 50th Year Anniversary of the Jazz Degree Program

Throughout 1997, the UNT College of Music Division of Jazz Studies celebrated fifty years of jazz and jazz education at North Texas. The first of its kind in the nation, the jazz program at North Texas has been a model for other programs throughout the world. To commemorate this milestone, various events took place that year, including an all-alumni lecture series beginning March 4, 1997. A commemorative CD set of recorded performances spanning the fifty year period of 1947 - 1997 was released.

The year of celebration culminated with reunion concerts on November 14 and 15, 1997. All alumni of the jazz program were invited to attend this special two-day event. The Fall Concert, on Saturday, November 15, was open to the public and featured an all-star alumni band as well as the 1:00 Lab Band.

Many more additions to come...