Tell me about your work: Daniel Rojas

I’m a film composer and music producer, based in Los Angeles.

[Daniel Rojas's website is www.506music.com. His IMDB profile is www.imdb.com/name/nm3908159/. His music can be heard in the movies Downsizing (currently in theaters) and Crash Pad.--JM]

I always enjoyed writing music, and film music in particular. So I’ve honestly been aiming for this for a long time… I started with short films and commercials, and moved into film and TV over the past 7-8 years.

When I was young I was a huge fan of film scores, mostly due to the influence of my older brother (who was an even bigger fan). So I think my preparation started with listening to a lot of scores and learning how to play them on the piano and guitar. It’s similar to learning jazz by ear, a lot of it is imitation and learning the language. I would also transcribe many of them by ear cause I didn’t have access to the scores when I was in Costa Rica. Then I went to UNT and did my jazz studies degree, first as a guitar major, but switched to jazz arranging because it was closer to what I wanted to do. One thing that was very useful was that I learned Logic and Pro Tools by myself while I was in school (it wasn’t offered at the time), so when I moved to L.A. I was able to get jobs as an assistant.

I usually do an hour workout in the morning because I know as soon as I get to the studio I might stay there the whole rest of the day. So I try to be at my studio around 10 a.m. and usually start off by taking care of emails and admin stuff. Then I often check my work from the day before because it's always useful to listen again with a fresh ear. I'm more creative in the afternoon and evening, so that’s when I try to write/produce or schedule sessions.

To me, the feeling of going into a movie theater and listening to something you wrote might never get old. It’s still something relatively new for me but it always gets me very excited. Same with songs, I think songs have a value different to scores because they can stand on their own more easily, and often reach bigger audiences - which I also find very rewarding.

There’s a lot of politics and heavy competition involved in the music and film industry. That’s no surprise to anyone but it's certainly a daily challenge. If you want to work you need to find a balance between what you want to do and what the client or audience expects…because while we are artists, we serve a specific role in the film or record we’re working on, and it’s very important to keep that in mind and not let ego take over. 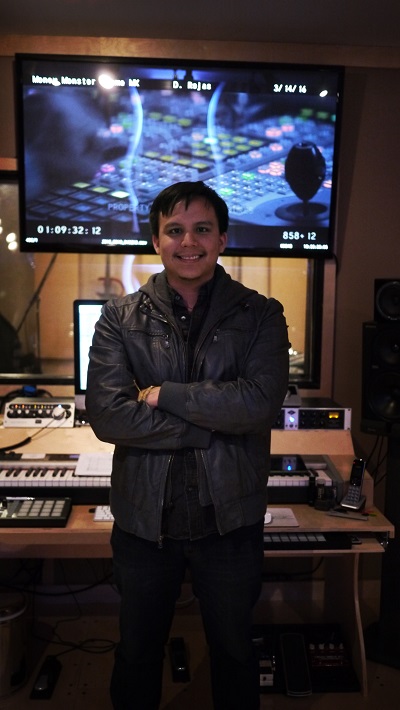 Film and pop music rarely reach the harmonic and rhythmic complexity of jazz, but I feel like having a solid background in jazz gives me a lot of tools. I work with colleagues from many different backgrounds, and one thing that I never have to worry about is “what meter is that?” or “why does that chord sound weird?”, because those are things that come very naturally to me after my formative years at UNT.

Worry less about lab band auditions! Reading is important, but unless you are pursuing a spot in a professional big band I feel like that's a lot of wasted energy. Instead, I would take more time to learn other instruments (even at a basic level) and further my knowledge of ethnic music. I would also spend more time learning about audio software and studio equipment, and practice a lot of piano.

I’ve done quite a lot of work as a studio guitarist, mostly because I’m familiar with the language of film and pop music so other composers and producers feel comfortable hiring me for their sessions. I do a lot less now, but over the years I’ve recorded for prominent composers like Klaus Badelt, Hans Zimmer, Gabriel Yared and Alan Menken; as well as pop records for Demi Lovato, Jason Mraz and Bryan Adams.